For the second time in as many years, I am standing at the entrance of a fetish shop staring at myself. It’s not my reflection. The entrance has been covered with an image of me: life-size, naked and poking my tongue out. Seeing myself here was not unexpected, but still a surprise. I do a lot of modelling for artists, but not much commercial work, so I’m not accustomed to seeing myself frozen in large format in public spaces. I’m amused to find out that I’m also on the carrier bags. 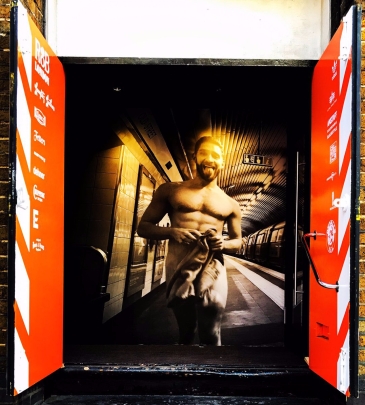 The image that graces the entrance to Gear London (now open!) was taken from a particularly fun, but somewhat risky, shoot on the London Underground. It was risky because Transport for London doesn’t like photographs being taken at the best of times. They are even less enthusiastic when the model is completely naked.

Neither the entrance nor the carrier bags have a full frontal image. My bum is on the carrier bag, and I’m holding a well-placed jacket in the entrance. Still, there I am, for the good folk of Shoreditch to see, with nothing more than a cheeky smile and some good lighting.

The texts have been trickling in since the store opened. For the most part, people have been delighted to see me. Which is flattering. Then I was amused to discover that some people were concerned. Did I know the picture was there? Did I give my permission? What if someone from work saw it? The enquiries were invariably well intentioned, but somehow left me a little nonplussed.

I’m often naked and I’m often paid for it. It’s a perk of having a healthy lifestyle and limited inhibition. I don’t broadcast that fact to everyone in my life because it’s not usually relevant. I also don’t bother to hide it because I don’t see any reason why I should. The implication from the concerned texts, that I’m doing something unscrupulous or unseemly, is at best misplaced, and at times outright hurtful.

For starters, if I were in the window of a fashion store, nobody would question the legitimacy. One would assume I had agreed to a photo shoot, been adequately paid for my time and efforts, and that I had given some kind of formal consent. The fact that Gear sells fetishwear shouldn’t render any of these assumptions less valid.

People who know me should know that the integrity of my work is important to me. I don’t allow my scientific output to be misrepresented or plagiarised. Similarly, I don’t allow my image (clothed or otherwise) to be used without my consent or in a way that promotes an agenda that I don’t support. The only difference is that anything I do that involves sex and sexuality is often undermined by a pervasive and condescending moral viewpoint.

Anyone with access to the Internet can learn pretty much all there is to know about me. I’m not one for secrets or confessions. The same month that my image appeared on the doors of a fetish boutique was the same month I submitted my thesis in cognitive neuroscience. I do more than one thing in my life.  I am proud of everything that I do.  I am only one person.